There was a Problem?

So perhaps you’ve noticed lately on sunny days forecasted highs have been lower than the actual highs by several degrees. Well… it turns out that’s not entirely true.

During the deepest part of winter when the polar vortex was regularly occurring (late December into January), we were having equipment issues. Normally, we measure temperatures inside an enclosure that has a fan running on solar power during the day and batteries at night. Unfortunately, the weather destroyed the electronics that controlled the battery charging, among other casualties.

As a quick fix, we installed a passive (fan-less) shield for our sensor. Passive shelters are fine during our normally very cloudy, windy winters. Wouldn’t you know it, the sun decided to show up and, along with it, gentle breezes! That makes for beautiful winter days in Marquette. It is also a recipe for solar-induced sensor errors.

The snow acts like a mirror to the sun and the reflected radiation gets into the sensor and heats it up. How much? A rough estimate, based on before and after tests of running with and without a fan, is 3-5 degrees F. Studies have shown that, in fact, on completely calm, sunny days over a fresh blanket of snow, errors can reach up to 18 deg F! END_OF_DOCUMENT_TOKEN_TO_BE_REPLACED

Looks like some more snow will fall overnight Saturday into Sunday AM. Amounts are in flux at the moment. NWS is estimating 1-2″ and Weather Underground is forecasting 3-5″.

Stay tuned! The WU forecast is updated every 20 minutes. NWS updates less frequently but we check once per hour. 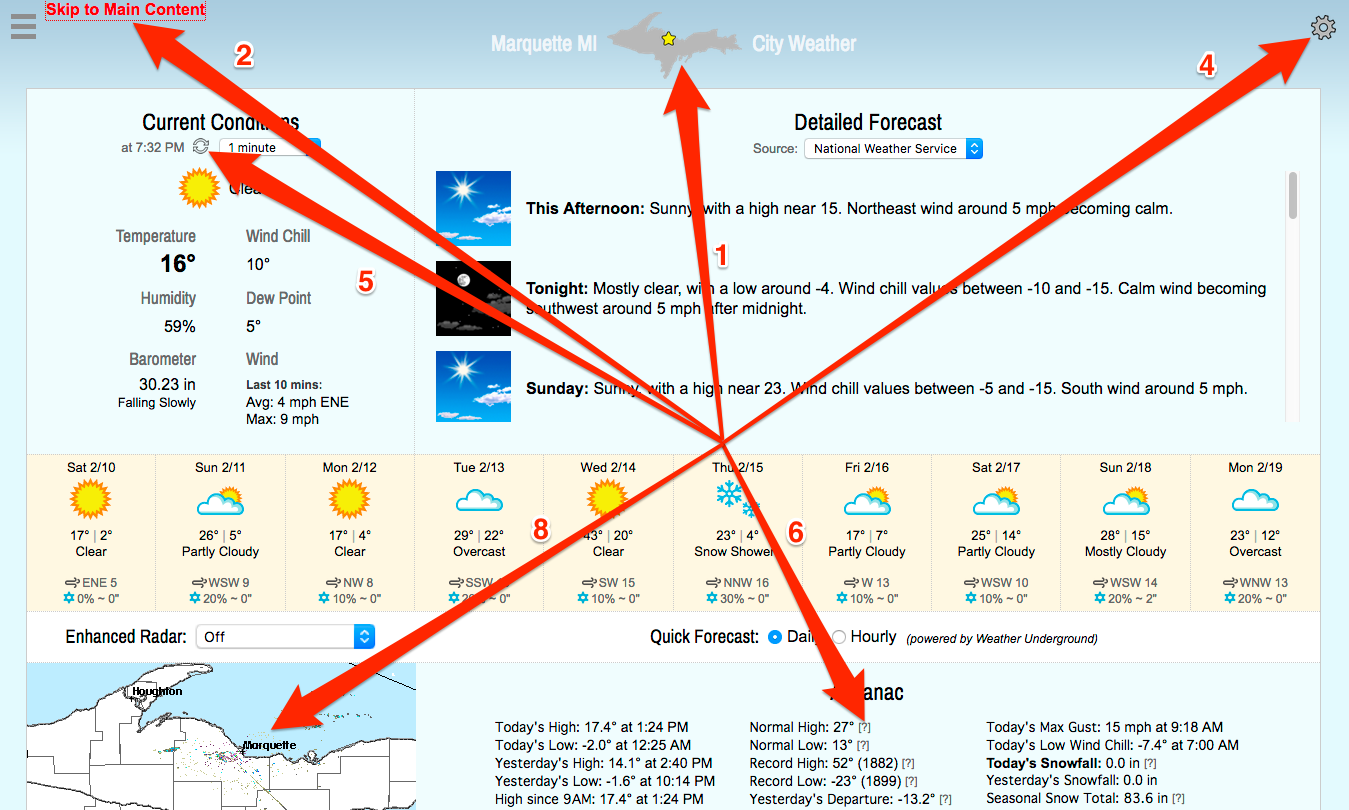 The site is designed for maximum efficiency and clarity. Most of our visits are less than 1 minute long. Visitors arrive at the main page, and within seconds they understand present and future weather in Marquette. But, did you know, there are tricks that will ease your journey even more? END_OF_DOCUMENT_TOKEN_TO_BE_REPLACED

How about the mornings where town is 20 or 30 degrees warmer than nearby locations?

Ice forming on the lake, partially cutting off cloud formation, seems to be helping brighten the long winter. In time, we may be joining the subzero parade once the lake gives off the last of its heat.

Looks like a very nice weekend ahead if you don’t mind slightly below normal temps.

The following weekend it may be TOO warm (near freezing). I hear the sled doggies (UP 200) like it a bit colder. Like below zero. Anyone know if that’s true?

How would you rate this winter so far?

P.S. Commenting is very easy. Just enter your name and email. That’s it. We won’t spam you, don’t worry.

Over the last 30 years, the city has averaged 117.2” per year of snow. That’s based on measurements taken every morning close to the lakeshore (at the Water Filtration Plant which houses the official COOP weather station for Marquette, MI).

A few days ago we added a “Seasonal Snow Total” entry to the Almanac section on the home page. This should provide some insight into the kind of winter we are having. Currently, the official weather station is seeing below average snowfall so far (55.1″) while we are experiencing above normal totals (83.6″).

Here at marquetteweather.com, located 1/4 mile south of downtown and approximately 100 ft above the lakeshore, we measure up to 4x daily.  According to the Community Collaborative Rain, Hail & Snow Network (CoCoRaHS), if snow stops falling midday, measuring the next morning can mean up to a 50% reduction in measurement (see below).  END_OF_DOCUMENT_TOKEN_TO_BE_REPLACED