I wrote about this yesterday on Twitter. Given the limitations of that platform, however, I couldn’t really go deep. Let’s dive in. 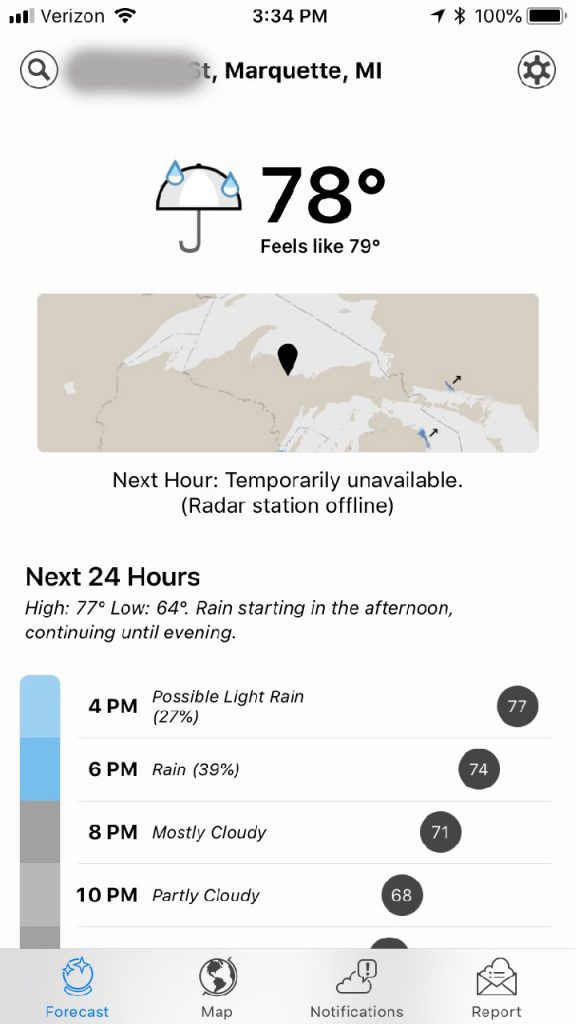 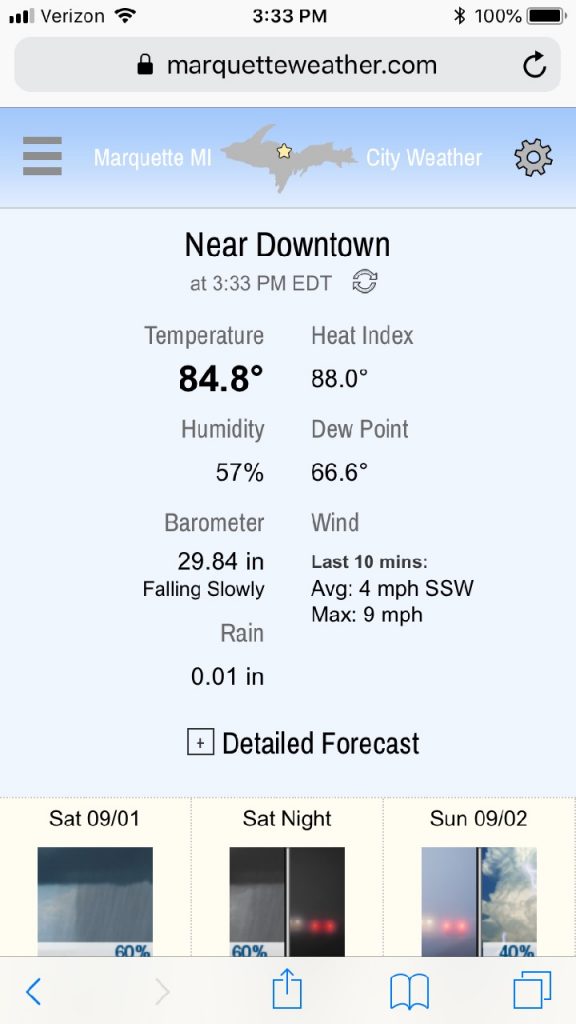 The 1st image is of a popular weather app recently redesigned for the iPhone. The 2nd image is our universal web app loaded in Safari on an iPhone.*

The weather app is guessing the temperature based on current satellite and weather model data. It has no access to measurements on the ground.

Our web app, on the other hand, is tied directly to our primary weather station, with another station standing by as a backup as well as to keep the primary station honest. Both stations are checked using calibrated and certified equipment. My long-suffering neighbors can testify that no one personally samples the weather more than I do with a variety of strange contraptions!

Due to Marquette’s proximity to Lake Superior, our weather is often specific to town or parts of town. Conditions change rapidly and do not closely, or sometimes even loosely, follow the models. While Marquette is somewhat of an outlier example nationally, overall, weather is a nonlinear system. It can depart from simulations or predictions at any time.

Even if a weather app references weather stations, it can choose one that’s either too far away, inaccurate, or combine several inapplicable or subpar weather stations into an average temperature.

Awhile back I was forced to pull down hourly forecasts, the marquis content of most weather apps, due to repeated errors. When spot checking them I would find wide departures on a daily basis in forecasted temperatures, cloud cover, precipitation, wind speeds, and/or wind directions. Even limiting the forecast to the next 10 hours didn’t help because all too often the current hour was way off. We have a forecast target of +/- 3 degrees. That’s a 6 degree window. If an hourly forecast, especially for the current hour, can’t be within 6 degrees the vast majority of the time, it’s not worth publishing. I wasn’t going to continue misinforming our visitors just because the public had been conditioned to expect a certain weather product.

Contrast that philosophy with popular weather apps where the standard is not accuracy but plausibility. In other words, if it won’t cause most people to bolt and stop using the app then it’s acceptable. Even according to this “smell test”, it would seem, the temperature comparison pictured above fails. So how do they get away with it?

App developers learned long ago from marketing research that content is secondary to design. In other words, the design IS the content. That’s what motivates people to install and use apps. Developers know that as long as they have a compelling look & feel along with a trusted “brand identity”, the content will appear acceptable. The assumed fallback position in the user’s mind is: “this is a popular app so it can’t be that bad”. See also “nobody’s perfect”. [Full disclosure: I’ve spent 15 years as a professional developer.]

You know that we have crossed a new threshold in history when, increasingly, people no longer seem especially interested in verifying the most basic aspects of their physical reality. They are happy to accept a mediocre or poor representation of it as long as it’s easy, attractive, and they receive positive reinforcement.

Meanwhile, the trend in technology continues toward hiding “complex” information (like humidity, dew point, pressure, wind) in favor of the bare minimum “need to know” data (like temperature only) as determined by the men and women behind the curtain. Combined with similar trends elsewhere, such as shoe-horning complicated political or social phenomena into over-simplified, looping graphical memes, the public is losing the ability to abstract and reason. We are regressing into or remaining stuck within toddlerhood by thinking primarily in pictures and concrete concepts.

Look again at the two screenshots above. Notice how the popular app uses weather icons that 20 years ago would have been confined to primary school students. If only such simplistic, childish iconography weren’t commonplace in apps and websites. Could it be that inundating the public with a cartoon version of reality (and treating more refined representations as outdated) is a subtle form of brainwashing intended to produce a herd of simple-minded, pliable people?

This site runs counter to all those trends. How so?

First, we trust our visitors with what for decades was considered essential weather information for the general public. There is nothing particularly “nerdy”, for example, about publishing a weather almanac as the archives of just about any newspaper in the country will prove. Two words: Farmer’s Almanac.

Likewise, text is not inferior to graphics. Humans have spent eons developing language skills. Why should we suddenly surrender them to cute emojis?

Unfortunately, most of those “free” apps and websites aren’t actually free. They allow Google, Facebook, ad providers, and other 3rd parties to track you relentlessly. Whereas we run the site at a loss as a service to the community. We don’t host any 3rd party tracking whatsoever. In fact, we won’t even link to Google’s script or font libraries because those, too, are potential tracking mechanisms.

We use open-source Matomo to analyze basic traffic trends on the site. The information we collect, which is non-personally identifiable, never leaves our server. We don’t follow you around the internet, embed ourselves in your phone, or track your location. We would never sell or give any information about our visitors to anyone for any reason unless legally compelled to do so. In fact, visitors are invited to visit the site with ad, cookie or script blocking extensions installed in their browsers. The site should retain all basic content functionality with, perhaps, some features like auto updates or enhanced radar views disabled.

On this site the content IS actually the main event, not a distraction from our true intentions. We are serious about sharing accurate weather information. The object of the site’s design is to require as little clicking, scrolling or downloading as possible to comprehend current, past, and future weather. If some people think the result is equivalent to keeping up with the Flintstones, then yabba dabba do!

Most of all, we are your neighbors, not some company in Silicon Valley that considers our town irrelevant. Marquette is such a fascinating place to observe and catalog the weather. We intend to do it right and do right by the good people of this city.

* In case you didn’t know, our website is fully responsive and can be loaded onto any device you choose regardless of the platform (Windows, Mac, Android, iOS, ChromeOS, Linux, etc). You never have to visit an “app store” to download it. You only need a web browser (pre-installed on every device).