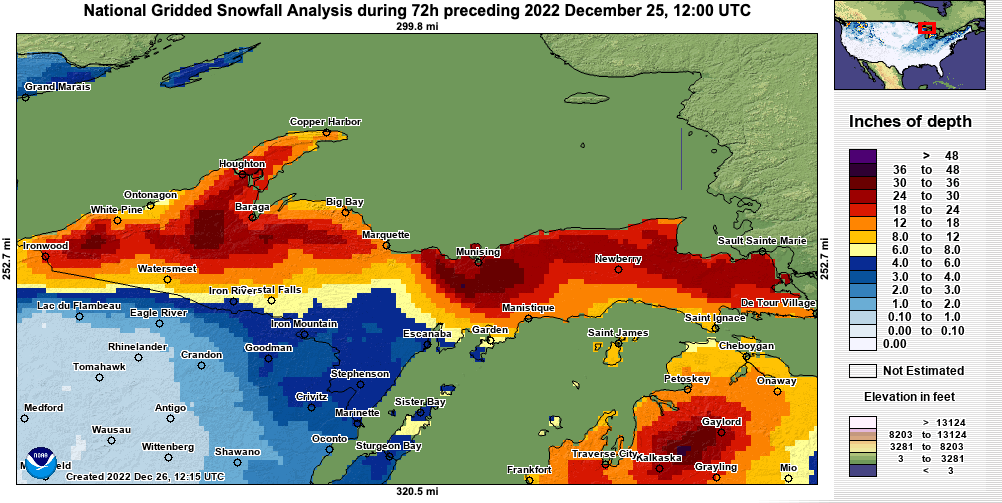 The pre-Christmas winter weather event began with two days of moderate snow & relatively calm winds (12/21-22). We were under a “Winter Weather Advisory” during the front side of the area of low pressure. Once the center of the low passed to our south, winds flipped to the northwest, and the blizzard warning began (1 AM 12/23) which lasted until 1 AM 12/25.

While our maximum wind gust of 38 mph on 12/23 was nowhere near a record for our station, that day ended as the windiest day in station history (7.5 years in service) based on sustained winds. The following day was our 4th windiest.

END_OF_DOCUMENT_TOKEN_TO_BE_REPLACED

Expect high winds & significant snowfall in the days leading up to Christmas (Fri/Sat).

It’s still too early to discuss exact amounts of snow or top wind speeds. Have the shovels, snowblowers and/or generators ready though.

As of 11:25 AM Tuesday, max winds should occur Friday afternoon thru early Saturday morning. If power should fail, buildings without a backup source of power or heat will cool quickly as temperatures slide into the teens or colder.

END_OF_DOCUMENT_TOKEN_TO_BE_REPLACED

After 50+ hours of snowfall, the sun finally appeared this afternoon!

This was a storm for the record books on parts of the Lake Superior Plateau (Negaunee area) where they received over 37″!

Down closer to the lake, we measured 18.3″ between 8 AM Monday the 21st and 5 PM Wednesday the 23rd. Meanwhile, the city’s official station recorded 13.5″ from 8 AM Monday to 8 AM Wednesday (we only recorded an additional 0.6″ after 7 AM). No daily or monthly records appear to have been set in Marquette.

Yes, “Twosday” (2/22/22) was by far the snowiest day of any February in our 5 years of measuring snow. In fact, that day ties 12/01/2019 for the snowiest one-day total on our record books. However, the December day produced 1.44″ of melted snow. Whereas yesterday the snow only melted down to 0.65″. Much lighter snow this time around! You can thank the colder temps for that — something you might have thought you’d never do.

It appears this was a very elevation-dependent storm system with Big Bay recording 20″ and similar numbers as ours from a station in Harvey close to the lake. Further up in Trowbridge (elevation: ~1000′), we see totals approaching 2 feet. That all makes sense since the lake definitely played a big part in the storm. Lake-effect (or enhanced) snowfall is quite subject to forces of elevation. For reference, we are 100′ higher than the official COOP station in Marquette, which partially explains our higher snowfall totals (generally, in fact).

Not for nothing, the website quadrupled it’s normal traffic on the 23rd! Google really likes our snowfall measurements and weather history pages. Many thanks to our dedicated visitors who encourage us to keep marching out into the wind-driven snow to take those measurements all winter long!

Beginning around 9 PM on Friday December 10th and lasting through about 2 PM on Saturday the 11th, an area of deep low pressure tracking near the Straits of Mackinac resulted in significant snowfall at our station near downtown Marquette. Overall, we measured 7.8″ of heavy, wet snow, although up to an additional inch may have fallen and gone unrecorded due to slightly above freezing temperatures, wind and sunshine. Our storm total was similar to a nearby report in Trowbridge of 8.5″.

Our highest wind gust during that period was 37 mph in the 11 AM hour. The 11th was the windiest day of the month so far in terms of sustained winds.

Our only real impact was time spent removing snow from the property afterward. No power outages were experienced during the storm.

For a detailed hourly breakdown, please check out our Weather History page and select the dates above (Dec 10-11, 2021). We don’t offer hourly precipitation data, but all other parameters like wind, temperature, and pressure will be available.

Following 2 days of highly unusual lake-effect snow (8″ recorded at our station), Marquette saw it’s coldest October 27th in recorded history. NWS Marquette has confirmed that the low of 20° this morning set at the COOP station near the lakefront broke the old record of 22° set back in 1887.

October is running about 5° below normal. As of the morning of 27th, this is the 19th coldest October on record (since 1857). Finishing in the top 20 certainly appears doable if the forecast holds.

Overall, we’ve had a cool (meteorological) autumn so far as September was also a couple degrees below normal.

We’ll just have to see what the winter brings. It could all turn on a dime next month. But at least the weather’s never boring in the U.P.!