During the 2:00 – 4:30 PM time frame on Tuesday afternoon (12/17/19), Marquette saw two distinct lines of heavy snowfall that spanned approximately 75-100 miles west to east on radar (~ 10 miles north to south). The first hit about 2:15 PM EST. A second line had formed 2 hours later. Both only lasted for about 15-30 minutes. In between were light to moderate lake-enhanced snow showers. During each burst of snowfall, visibility dropped well below a quarter mile and winds were gusting near or above 20 mph in town according to our instruments and the U.S. Coast Guard station.

Snow squalls, often associated with strong cold fronts, are a key wintertime weather hazard. They move in and out quickly, and typically last less than an hour. The sudden white-out conditions combined with falling temperatures produce icy roads in just a few minutes. Squalls can occur where there is no large-scale winter storm in progress and might only produce minor accumulations. Snow squalls can cause localized extreme impacts to the traveling public and to commerce for brief periods of time. Unfortunately, there is a long history of deadly traffic accidents associated with snow squalls. Although snow accumulations are typically an inch or less, the added combination of gusty winds, falling temperatures and quick reductions in visibility can cause extremely dangerous conditions for motorists.

While the first squall was unfolding, I examined some satellite imagery (not pictured) and saw lake-enhanced cloud bands streaming off the western lakeshore of the U.P. and drifting east toward the city on the west-northwest “steering” wind. This served as additional fuel for snowfall.

During the second squall (pictured above), winds in town turned briefly north-northwest bringing in lake moisture once again. 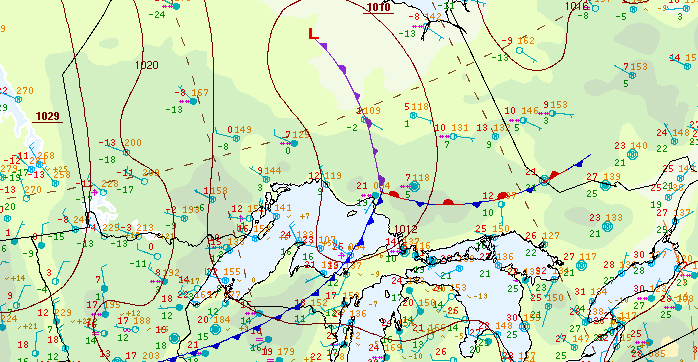 The surface cold front (pictured above) actually passed through town around 10 AM Tuesday. Think of this like an iron that isn’t plugged in. The flat, wide part is at the bottom — ground level — and it slopes up and back as you get to the handle — the upper atmosphere. The bottom of the cold front, due to it’s greater density, digs up air at ground level. As the surface front continues moving southeast it lifts the warmer, moister air in the lower atmosphere behind it progressively higher and causes moisture to condense. This process is not always orderly. Bursts of cold air can create bursts of precipitation, especially when coupled with pre-moistened, warm(er) lake air.

The weather models had cold air moving in later in the evening, which is why the forecast called for, maybe, 1/2″ of snow during the day.

All told, we measured 1.6″ by 5 PM Tuesday.  The main hazard, as always in such situations, was the sudden, unexpected drop in visibility.

The surface low eventually moved southeast overnight (slightly deepening by about 5 millibars). This morning there were snow squalls in Toronto as the cold front passed over them.

To keep up with discussion of city weather events in real time, please follow us on Twitter @mqtweather.