Unfortunately, I have decided to discontinue snow measurements. Last winter finally persuaded me of the limits of collecting and tabulating daily snowfall — even on a double city lot. The wind eddies around nearby structures result in huge drifts when winds gust upwards of 40 mph. As Marquetters know, this is an all too common event in the winter, particularly when storms come off Lake Superior. It then becomes very difficult or even impossible to separate drifted from newly fallen snow. Sometimes the snow boards are simply blown clean. Taking measurements from multiple locations won’t improve matters when everywhere around is subject to the same forces.

END_OF_DOCUMENT_TOKEN_TO_BE_REPLACED

You may have seen the widely circulated story that the local National Weather Service office has measured over 200 inches of snow this season as of Monday morning, February 25th. Unfortunately, some articles have explicitly assigned the total to Marquette. Others have allowed readers to conclude that this is a representative total for the area. In fact, the NWS office is located well outside of the city limits in the highlands which receive substantially more snow.

A helpful rule of thumb is that for every 100 ft you gain in elevation, you can expect 10 additional inches of yearly snowfall.* Of course, there are other factors, such as differing lake exposure, that come into play in the wider area. For this comparison, however, elevation is the key difference. So, given that the NWS office is 800 ft higher than the lakeshore of Marquette, that represents approximately 80″ of additional snowfall per year. In fact, that’s very close to the 30 year normals. Marquette normally receives close to 120″, and Negaunee Township gets a little over 200″ per year.

So far this season (October 1 – February 25) in Marquette, the city’s official NOAA COOP weather station has recorded 96.3″. That’s less than HALF the amount the NWS office received. Just a mile away from the COOP station at our location, 3 blocks south of downtown, we recorded 108″ in that period. We are about 100 ft higher than the COOP station, which explains why we’ve had a bit more snow. To be more than fair, I would allow for an additional foot or so lost to high winds this winter at our station (which would give us about 120″).

So, in other words, both Marquette and Negaunee Twp have received something close to their normal seasonal totals thru the end of February. That would be the proper way to frame a story if, indeed, you were writing about Marquette.

END_OF_DOCUMENT_TOKEN_TO_BE_REPLACED 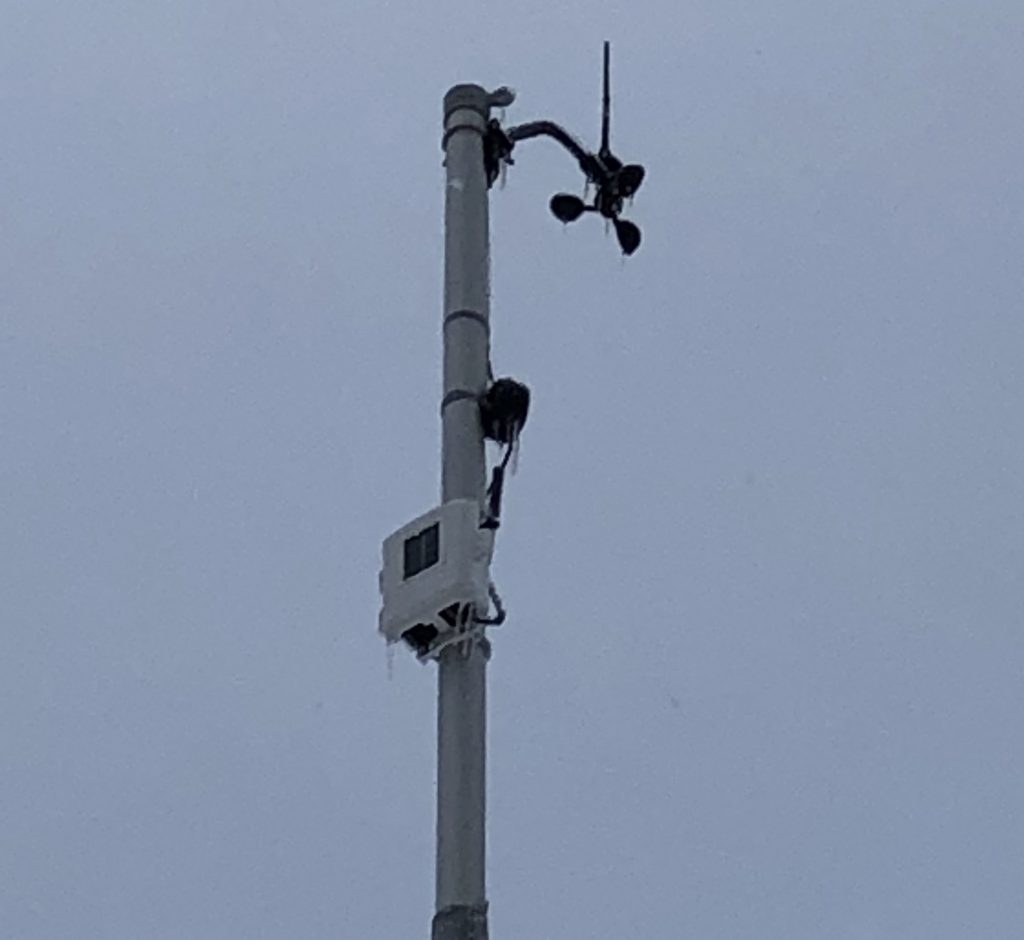 Like every other object in its path, Monday’s ice storm did a number on our anemometer (wind gauge). The pole to which it’s mounted cannot be retracted because… you guessed it. So nothing can be done but wait.

It’s going to take either a big gust of wind (> 25mph), some sunshine and/or warmer temperatures to free the spinning cups. Until then, wind speeds will read 0. With temps barely cracking 20 in the next 5 days, it might be awhile before it’s fixed.

The directional indicator is currently turning as it should.  So if you see “N”, that means winds are coming from the north.

Just FYI, the National Weather Service says this is only the 2nd time in the 2000s that an Ice Storm Warning has been issued. It’s just not something we are accustomed to up here. That’s doubly true for February. We got about an inch of freezing rain out of that storm!

That was until the #PolarVortex hit us last week. No chance of that now. After ending 2018 below normal, we are off to a cool start for 2019.

Snow is running below normal too. That makes sense when its colder as the atmosphere runs drier.

The latest winter storm has underperformed (thus far) in terms of city snowfall. No measurable snow as of 10:30PM Tuesday night. Too much westerly flow, not enough northerly.  That hasn’t kept the wind from kicking up quite a bit of blowing snow. Wind chills as of this posting were -20 and falling. You never know. I could post this, go to bed, and wake up to 6″ tomorrow.

This weekend should offer a reprieve, but don’t get too used to it. There appears to be another cooling trend in the extended outlook.

Punxsutawney Phil might be held at gunpoint this year.

[UPDATE Wed 1/30/19 9:00AM]: Our snow board had only a trace of snow on it this morning. Our gauge caught what amounts to something like 1″ of snow (when you reconstruct it from liquid equivalence and compensate for under catch from wind).

Not since February 2015, has Marquette seen a high temperature (measured from 8AM – 8AM) below 0 degrees. Can we add another subzero day to the record books?

The Coast Guard station is only about 100 yards from the official station in Marquette. It reported a high of -2 yesterday. At our station half a block from the Vet’s Home, we reached a daytime high of -2.5.

Also we’re keeping an eye on whether a record cold high temp was achieved. The previous record of -3 was last set in 2014. Meanwhile, we await official word. I will post an update below once I know.

Another day spent below 0 is possible on Wednesday. We should escape the worst of it, though, as the main core of cold air slides south of us. Be careful if you are traveling south into MN, WI, IL or lower MI. Life-threatening cold is in store.

Relief looks to arrive this weekend. 30s maybe. Keep an eye on the extended forecast.

UPDATE 1/28/19 1:00PM: We’ve received the report. The official weather station in Marquette saw a high of 1 degree between 8AM Sunday and 8AM Monday. Therefore, no records or notable events.

Between 4 & 5AM this morning, there was a rise in temp. We hit -1. The Coast Guard reported 0. Guessing the official station rose to +1 around then.